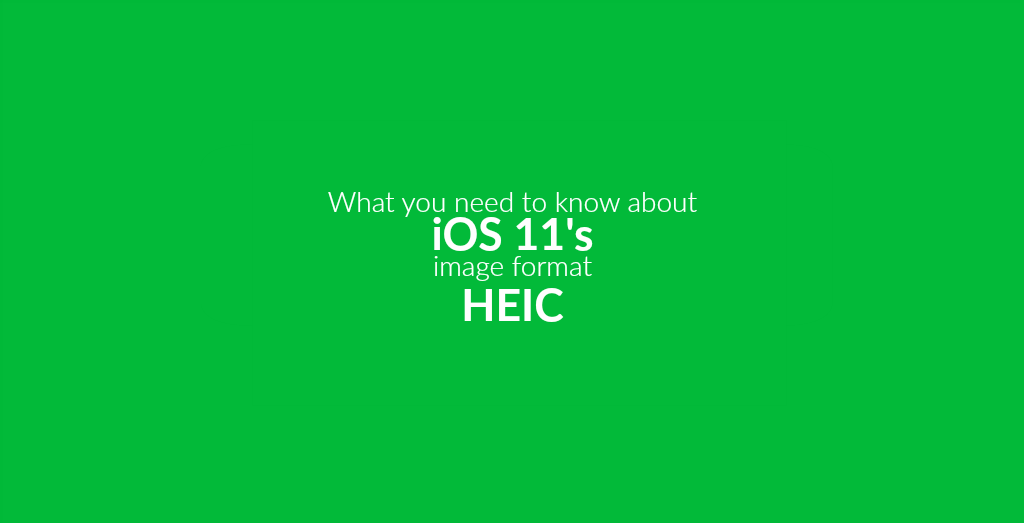 If you own an iPhone, iPad or another Apple iOS device, you have certainly noticed this already. Apple released a huge update from iOS 10 to iOS 11. This update came with some major changes and improvements. And it came with new file formats.

Since we at Online-Convert.com focus on file conversion, the latter is what we want to focus on in this article. iOS 11 introduced two new media formats: HEIC and HEVC. This week, let’s have a look at the new image format HEIC.

As the headline suggests, the HEIC image format is also known as HEIF which stands for High Efficiency Image File. It was not developed by Apple, actually, but by MPEG. They are responsible for formats we use on a daily basis, like MP3 (audio) and MP4 (video). This suggests that HEIC might be on its way to overthrow the reign of old (but flawed) JPEG.

Thus, let us have a closer look at the new format.

With the update to iOS 11, HEIC became the standard image format for all devices running on this iOS version. They are specially optimized for iOS devices such as iPhones, iPads and the iPod Touch.

The main idea behind this new format was to create a format that provides the good quality of JPG images but is smaller in file size. In fact, it seems that an HEIC image is roughly half the size of a JPEG image. There are even more advantages over images with a .jpg extension though. For example, HEIC files support transparency, just like PNG or GIF images. It can store multiple images at once (which is interesting for Live Images, for example). Furthermore, it can even store minor editing, like cropping or rotating, to undo them again.

What’s practical is that, even though the HEIC format is still quite new, Apple already got rid of a few compatibility issues. When sharing an HEIC image on social media, it is automatically converted and uploaded as a JPEG. That way, Instagram, Twitter, Facebook and such should not have any problem with your new image files. Furthermore, iOS 11 offers the possibility to send these images to a Mac or PC and immediately convert them to JPEG as well.

Problems With The New Format

Unfortunately, every change also brings a few problems. This is no exception. As mentioned above, there might very well be compatibility issues, that Apple has not fixed under the hood. While cloud services like Dropbox, GoogleDrive and by now also Microsoft OneDrive automatically save HEIC files as JPEG, other third-party apps and programs might not recognize this new image format. Image viewers for mobile phones or native programs on Microsoft Windows computer can thus not use these files. Even Adobe Photoshop is, by the time this article was written, not able to process HEIC files.

How To Work With HEIC

There are two ways to still be able to work with HEIC files, however. One is to disable saving images in this format on your iOS 11 device. Please note that this will, of course, get rid of their neat effect of being less space hogging. You can do so by going to Settings > Camera > Formats. Images will then be saved in the JPEG format again.

Another way would be to convert HEIC files into JPG using a file converter. The JPG Converter of Online-Convert.com can already handle Heic files and converts them to JPG. HEIC files containing several images will be converted into an archive containing a JPG for every layer or image inside the HEIC. Likewise, when converting to animated GIF or Video (e.g. MP4), any animation of a Live Image will be retained.