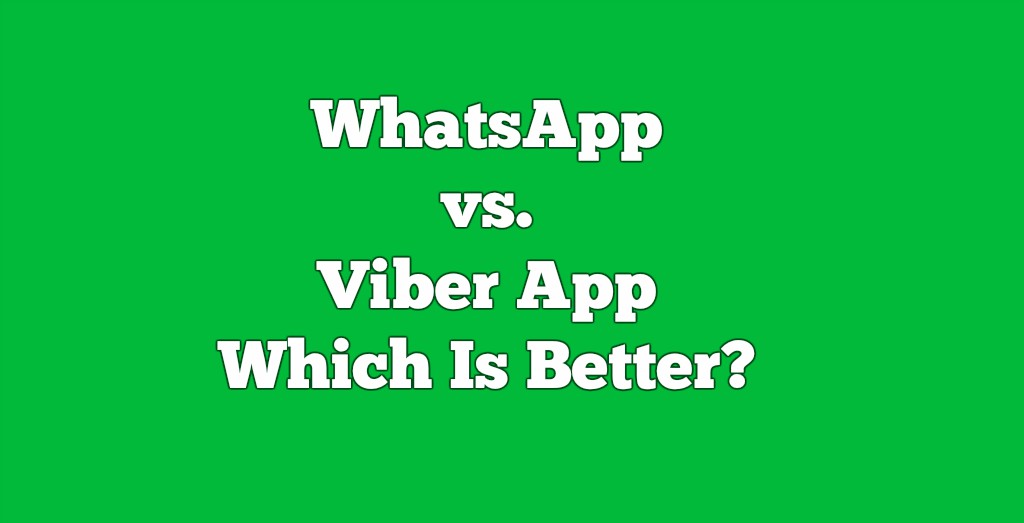 There was a time when SMS was very simple and you even had to pay to sent text messages to people. Those days are long gone since now you have apps to send messages and do much more. And all are basically for free. Two of the most popular messaging and VoIP (Voice Over IP) apps are Viber and WhatsApp. But which one is better of the two for you? This article guide will go over WhatsApp vs. Viber app comparison and let you know which is better of the two.

Since both of these messaging apps do far more than just allow you to send free SMS, there are several issues to consider. We will cover features such as video calling, voice call quality, user interface, groups, public chats and a few others.

The Cost To Use –

You can call people who don’t have Viber using the app but it will cost you about 1.9 cents a minute. This cost applies to both landline or mobile phones. Still, for Viber to Viber calling, the calls are always free of charge.

WhatsApp has a very simple to use interface and so does Viber. Since Viber does offer a richer interface, it makes it a bit more cluttered. WhatsApp was actually even simpler to use a few months ago. It was then that Facebook — which owns WhatsApp – decided to change the ‘Status’ interface of the app. That change, has made WhatsApp a bit less user friendly in the view of some.
One problem Viber has is the annoying Stickers they are always trying to get users to purchase. That gives the edge to WhatsApp.

WhatsApp and Viber both allow users to call anyone who has the app installed. The calls to anyone via app to app are free of charge. But when it comes to calling someone who does not have the app installed, WhatsApp is left behind. Viber allows you to call people worldwide in either mobile or landline numbers for a very low rate. To access this extra feature you need to connect your account to your Paypal or to a credit card.

This comparison may be one that makes the apps matter more to other users when it all comes down to it. Since most people use messaging and VoIP apps to connect with their friends and family members, this makes sense. After all, you want to be or go where you will find more people using the same app as you. When it comes to total number of users, WhatsApp is the clear winner. They have a bigger fan base and more people using it. Especially now that Facebook owns it. Still, Viber is slowly bringing more people into its fold due to the extra features it offers that WhatsApp does not.

Even though both of these apps began and are featured as messaging apps, many people use them to make calls. That makes this a very important part of which is better between Viber vs. WhatsApp. Viber has been offering both video and voice calling for a far longer time than WhatsApp has. They also have HD quality options for users with high bandwidth connections. The results are clear voice call quality.

The Winner – A Tie

You may not know it, but both WhatsApp and Viber have desktops apps that you can use on your computers or laptops. WhatsApp has one for either Windows or Mac. The same goes for Viber except Viber also has Linux. But when it comes to features, the Viber desktop app has much more to offer. Viber desktop apps allows to not only send IM, you can also make voice and video calls.

Viber has had video calling far longer than WhatsApp which just began offering the feature earlier last year. The quality of the calls will depend on the connection speed you have. But overall, Viber seems to be a bit better in Video calling for now.

The winner by default here is Viber since WhatsApp does not have public chats.
Using the public chats from Viber lets you connect with public accounts from many places, companies and groups.

This feature is offered on both the apps and they are basically the same. Both Viber and WhatsApp have the same features when it comes to group chats since these are created by users. This makes the contest a tie.

The Winner – A Tie

The hidden chat feature is another one that separates Viber from WhatsApp since only Viber has it. Using the hidden chats feature lets you keep the chat private and away from prying eyes. You set up a PIN number so that only the people who have it will be able to access the chat.

Most people love gaming on their mobile phones. Viber lets you play a list of games you can play along with other Viber contacts. WhatsApp does not have this feature either. Keep in mind that the games are not on the Viber app. However, they are created by Viber and let you challenge your friends to play one another. The winner by default, again is Viber.

Here are some Tips & Tricks You May Not Know About WhatsApp

WhatsApp may have a larger number of users than Viber does. That may explain why some feel that WhatsApp is better or more popular. However, when it comes to features, Viber is the clear winner. The app offers users a lot more than WhatsApp does. But, this doesn’t mean that you have to choose one from the other. You can simply have both apps installed on your phone and use them according to your contacts.