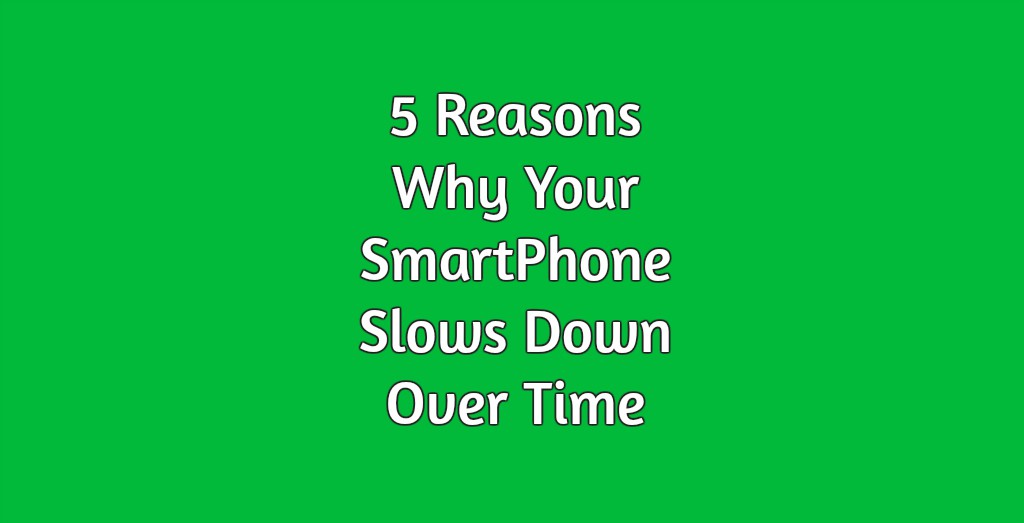 We all love our smartphones since they allow us to do so much more than just call people. With applications available for anything you can think of, our mobile devices are capable of practically doing it all. But unfortunately, over time, your phone will slow down. That is unless you are one of those individuals who changes his or her mobile device every 6 months.

The truth is that all of us who have smartphones experience the drop in performance as we use our devices. Some people often believe that the slowdown is in their head. However, if you had your device for at least 6 months to a year, you have experienced the downside in performance.

The problems are not either iPhone against Android either. The loss of performance is experienced by all users, regardless of their OS or hardware. So why exactly does this happen? Is there anything you can do to prevent it from occurring? These 5 reasons why your smartphone slows down over time will explain it all. It may also shed some light and provide some solutions to the slow down issues.

Apps Running In The Background

You don’t have to have an app running or have to use it in order for it to run in the background. In fact, there are countless of apps which run in the background of your smartphone. While you may have downloaded only 10 to 15 apps, there are at least 40 to 50 running in the background. The vast majority of these apps come pre-installed. They include OS apps and email applications which need to monitor any new emails coming in. You also have many system apps such as Maps, clocks, beaming services and so on. If you go to your settings and look for apps running in the background, you will be amazed to see how many there are. Since all of these apps need and use RAM and CPU, they end up causing your phone to slow down.

The best solutions is to un-install any apps you don’t use, avoid using live wallpapers and battery draining apps as well. And kill the apps that allow you to disable them in the background.

Your device came with a specific version of its own operating system. Whether you have an Android or iPhone, your mobile device has a version the smartphone came with. The OS were meant to work with those devices in mind. However, as new models are invented, the OS systems have to be upgraded to run with those models. That means the specs and hardware change drastically. The end result is your phone not being able to work as well with the new OS. With each OS update that is released, the amount of resources and computing power increases.

Unfortunately, apart from getting a new device, there is nothing you can do about this particular problem. You can choose to use the older version of the OS if you want.

Every mobile device or tablet runs on flash memory. One of the most commonly used memory is called NAND. Although the NAND is affordable and fast, it does have a few problems. These quirks in the NAND memory can sometimes result if performance issues. As the NAND memory is filled, it begins to slow down. As more blocks of memory are taken up, the speed loss begins to take place.

The best solution to avoid erosion or memory degradation, is to stay under the total capacity allowed by your device. Staying under 75% may do the trick as anything higher will cause slowdown. For those that have devices with 16GB of storage, never go over 12 GB. That will not only help keep your NAND memory running better, it will also extend the durability of your memory’s cells.

Apps have a tendency to start out well and then begin to add unnecessary bloatware later on. This is why so many apps are constantly adding updates. They will slowly add more permission requirements. With more permissions, it means more features added which don’t even need. To make matters worse, the majority of apps developers don’t seem to care about the amount of resources their apps use. With each update in an app, the amount of CPU and RAM they use, tends to increase.

The best solution is finding a similar app which is not as bloated or filled with unnecessary features. You can even find older versions of an app. Just make sure they have no security holes.

Here are 13 Cool Apps To Use Offline On Your Smartphone

When all’s said and done, your present device may not be as slow as you think it is now. You may believe it to be slower since you could be comparing it to newer models. This tends to happen each time a new model version of a person’s phone is released. Once our expectations about a device – no matter which one it is – grows higher, we demand more from it. Watching or hearing someone boast about their new device, and all of the wonderful things it does, may make you feel as if yours is no longer as great as it once was.