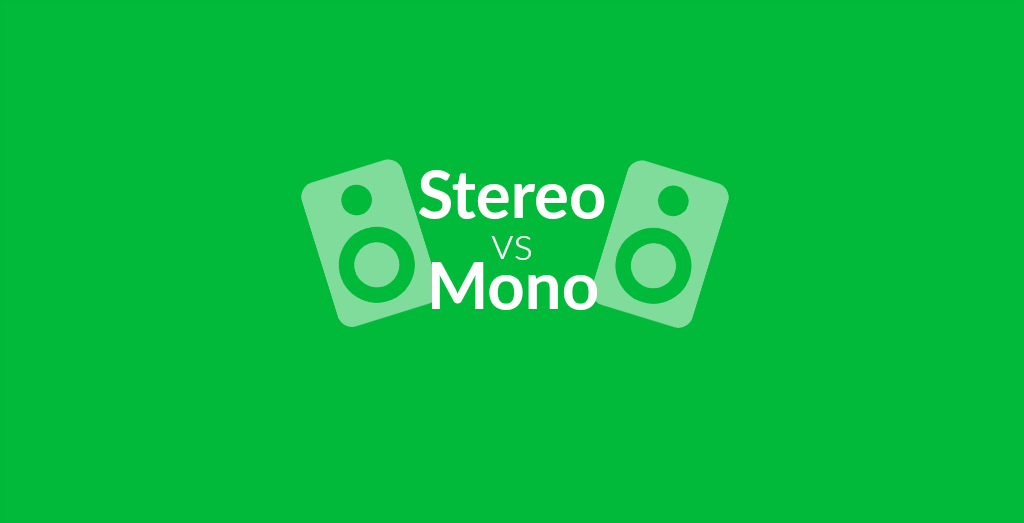 In games and on movie players you will find the option to change the audio channel between stereo and mono. With Online-Convert.com, you can change this for your video files as well, either on the website or using our API (check out the tutorial). But what does that even mean, stereo and mono? What’s the difference between the two. Can you even hear it?

Read more to find out what distinguishes stereo from mono. We also provide some graphics to understand the differences better and – the best part – an audio track that will actually show you the difference!

The Difference Between Stereo And Mono

The main difference between stereo and mono comes with the number of audio channels used in each. Think of sound as an acoustic signal that is send out by a source and transported using a channel. The destination is a speaker, which can be an actual speaker or a pair of headphones.

First, lets have a look at stereo and mono individually. However, for a quick comparison, you can jump to the summary.

What we know as stereo is technically described as stereophonic sounds. In stereo, several channels are used to transport audio signals to a speaker and thus to a listener’s ears. Typically, stereo uses two channels, but it can use more. In the most common set up, one channel is transported to one speaker and the other channel to another speaker.

Here you can see the aforementioned usual set up for stereo sounds. There are two different sources that send their individual signal to one speaker each.

This is all based on the typical set up of two sources of sound that are transported to two speakers. Instances like surround sound, for example, use even more speakers to further design where particular sounds are coming from.

Thus, stereo is used to create an impression of sounds coming from different directions, setting sounds in perspective to one another and the listener. This is especially useful in movies and audio plays to emerge the listener/viewer into the story. It is also used in music. For example, in some songs it might be that the guitar part is send to one speaker, while the bass is send to the other. When listening to music or plays out loud, this is often not very apparent. Headphone-users, however, are often very aware of stereophonic sounds. Removing one ear piece can reveal that a particular instrument or sound is only transported to your left or right ear.

In mono, also known as monaural sounds, there is only one source for the audio. While mono sounds can also be transported to different speakers, the signal that is played will still be the same.

This is visualized in the following graphic:

Here, the sound comes from only one sound and even though it is transported to two different speakers, the content of the signal is always the same. When listening to music or other auditory pieces using headphones, you will thus not hear any difference when you remove one of the ear pieces. The whole play with localization of sound thus gets lost in monaural sounds.

Here’s a concise summary of what distinguishes stereophonic from monaural sounds:

Now that we talked so much about it, you surely want to hear the difference between stereo and audio. Then go right ahead! Grab a pair of headphones and check out the following audio clips (source):

This one is the example for monaural sounds. No matter which earpiece you remove or lift, you will always hear both the footsteps and the buzzing of a bee.