Skip to content Skip to main menu
Home › Online-Convert › Dropbox or Google Drive – Which Online Storage is a Better Solution? 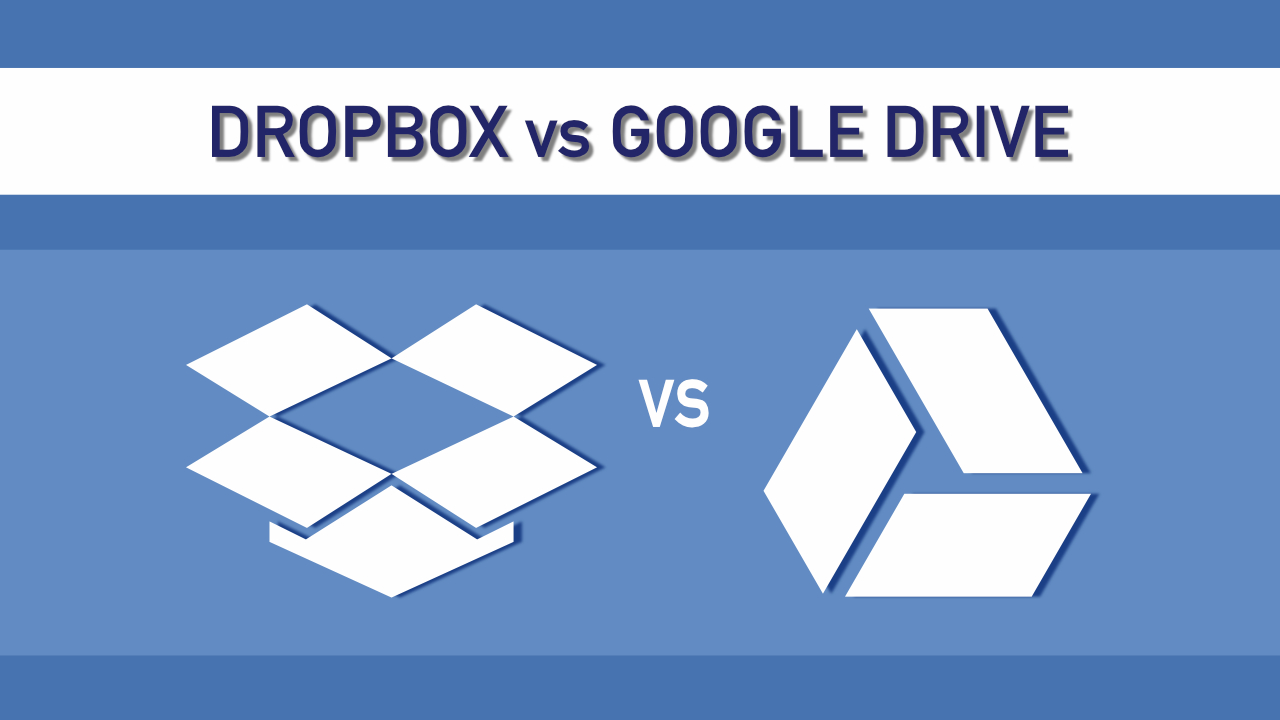 As you may already know, the two most popular options for cloud storage and backup are Dropbox and Google Drive. These two platforms compete intensely with each other. Today we are helping you decide – which of the two is the best option for your needs? Dropbox or Google Drive.

To decide, first consider a few important factors: what your total backup needs are, on which platforms you want to use them, and of course, your budget.

Dropbox is the better choice if you are more concerned about speed and performance, while Google Drive works best if you are already invested in the Google ecosystem. Let us take a closer look at both services below.

For many, it all comes down to the price. Both Google and Dropbox offer a few comparable cloud storage plans.

Free plans are available with both services. Google Drive (aka Google One) offers more free storage (15 GB) and cheaper options when it comes to different levels of storage. Keep in mind that the 15 GB limit also includes your Gmail account and Google Photos.

In order to get more storage space, you can upgrade to either a Dropbox Plus or a paid Google One account. A Dropbox Plus account costs $120 per year for 2 TB of space, while Google gives you the same storage space for $100 per year. Google also has other plans, including cheaper ones with 100 GB and 200 GB of storage.

With Dropbox, you need to opt directly for the Dropbox Plus account. There is also an individual Professional plan, which will cost you around $200 per year for 3 TB of storage space. Both companies offer discounts for annual payments.

When it comes to choosing where to spend your money, Dropbox makes sense for either individual users who need up to 2 TB of storage, or the teams who need a large amount of storage. Certainly more than the maximum of 30 TB that Google Drive offers.

Google allows free users to access the Drive from anywhere and on unlimited devices, while Dropbox users need to pay when using more than three devices.

When it comes to integration with different platforms – Google is the winner. Google Drive is built into most Android phones, tablets, and all Chrome OS devices. That is also the default way to save files to Google Docs and other Google Workspace tools. In addition, Google Drive apps are available on iOS and Windows.

Dropbox is also available almost everywhere, but its integration is not so seamless on mobile and Chrome OS. Surely, it is possible to upload and download to Dropbox on almost any platform, it just might take a few additional steps.

Both Google Drive and Dropbox can integrate with a range of other frequently used services, and Dropbox even lets you sign in with a Google or Apple account.

Google is a way better choice in terms of value and easier access to your files across multiple platforms. Dropbox, however, has some advantages as well! Especially when it comes to usability. Google Drive has support for the basic directory system of folders, and the platform would of course prefer to use its built-in search tools.

Dropbox, on the other hand, assumes that you know where you are putting your files. It is also easy to navigate through folders and subfolders (either in the application or in the desktop directory).

Dropbox definitely has a lead in performance, as well. When huge amounts of big and small data are uploaded, Dropbox offers faster upload speeds. Take this into consideration if you plan to use a lot of storage space very often.

Dropbox has a feature that speeds up the sending of files over your local network. It is called LAN sync. Files added to your Dropbox account will start copying even before they are fully transferred to the cloud. Unlike Google, Dropbox uses block-syncing to update changes quickly for you and all your collaborators.

Not surprisingly, Google is a better option for sharing storage among family members. Google One plans can be shared with up to five additional family members, a total of six users (costing $2 per month), while Dropbox only unlocks this option when you choose to pay for a 2 TB storage plan (costing $20 per month).

Individual files are easily shared on both platforms. If you are sharing accounts, there is not much difference between the two platforms. But, if you need a large amount of storage space on Dropbox, Google Drive is better in terms of value and if you want to share the storage between more users. Both systems offer tools to backup your files to the cloud.

Dropbox allows some of its premium options under more expensive consumer and business accounts. Purchasing additional Google Drive storage through Google One gives you:

It is a close call!

Compared to Google Drive, Dropbox has a superior interface and better performance. Dropbox syncs files much faster and you can also prioritize which file you want to sync first. Although more expensive than Google Drive, it offers many useful features. This could pay off, especially for the users who prioritize fast file sharing and using collaboration features.

On the other side, there is no doubt that Google offers better value on almost every point of comparison. Starting from lower prices, to integration with desktop and mobile operating systems, and storage sharing features – Google is certainly at the forefront of this duel.

The good news is: whichever of these two options you choose, at Online Convert, you can conveniently upload files directly from your Dropbox or Google Drive and convert them to another file format!