A Word document saves a lot of information that is invisible to unaware users. Some of the information may be considered classified and reveal too many things to prying eyes. It is therefore important for you to understand what metadata is and how to remove it.

What is Metadata in a Word Document?

The metadata is the document properties. It holds information regarding the Word document itself. It saves the details regarding the author, title, subject, the date the document was created, comments, revision marks, versions, annotations, and the person who last saved the document.

Cases of Metadata Risks and Concerns

One of the most prominent cases or the risk of metadata is the UK’s “Dodgy Dossier,” which was used as an argument to support the Iraq invasion. It was the revealed that the source of the document as a student paper written in 1991. Unfortunately, none of the perpetrators of the lies and the ones who led the UK to the war were put on trial.

Another example metadata risk revealed the incompetence of the United Nations in 2005. UN Secretary-General, Kofi Annan, doctored report on the murder of Lebanese Prime Minister Rafik Hariri. The revision changes revealed that some names were removed before the report was given to the Security Council.

Those two high-profile cases should be enough to convince you just how important it is to remove the metadata from your documents before distribution.

How to Remove Word Document Metadata

On the Document Inspector dialog box, select the types of hidden content you wish to view then click Inspect. 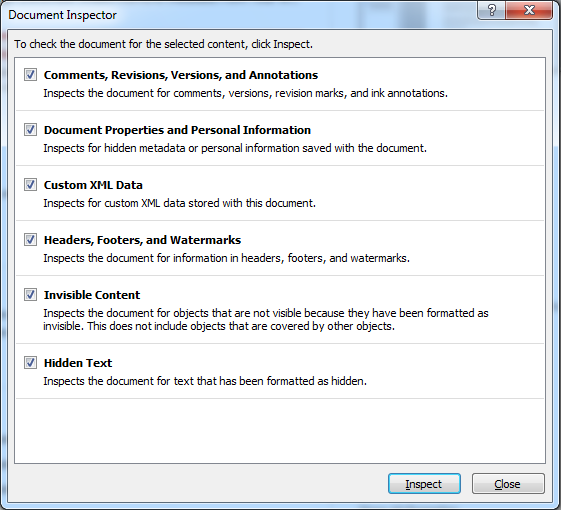 Here’s an example of the inspection result: 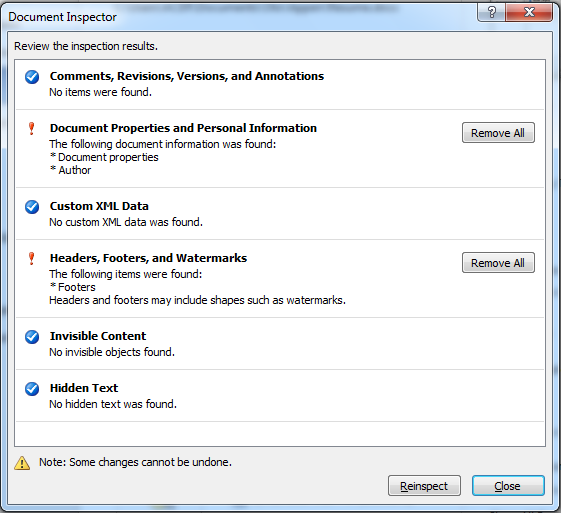 Click the Remove All button next to the type of hidden data you wish to wipe off your document and close the dialog box.

Even if you’re not handling classified information, it’s prudent to turn off tracking and wiping the metadata clean before distribution. What may not seem like an important or harmful piece of information now may turn against you in the future.

If you’re concerned about revealing private information unknowingly, just convert your Word files into PDF. You don’t need to worry about the other end not being able to open the files since PDF readers are ubiquitous in today’s computers. Modern browsers even have PDF readers built-in.