When it comes to creating videos – as well as when you convert them – there are a lot of different video formats to choose from. They range from 3GP with a smaller file size and lesser quality, to big, high-quality files like AVI or MP4.

However, even when watching videos, there are different “formats” to choose from. When watching a video on YouTube, you can choose different quality formats, depending on your viewing pleasure and speed and strength of your internet connection. 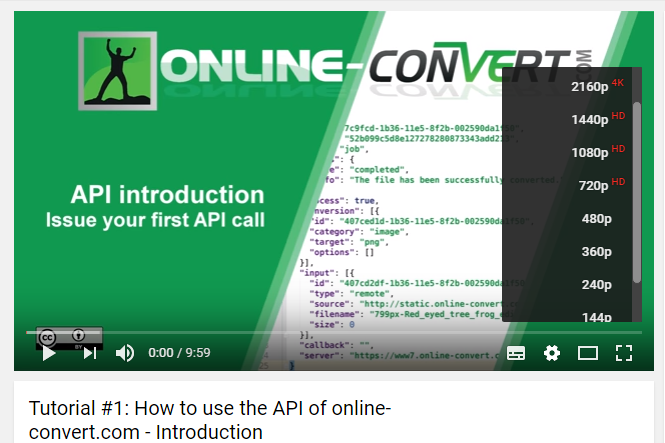 In the picture above, you can see different video quality types like 240p, 1080p or 2160p. But what do these little red notes mean behind a quality option? In this example, you can see HD and 4K being an option for you to choose from. And to shed some light into this darkness, we will have a look at these quality standards today!

Following, we will list the specifications and information about each of the quality settings mentioned above. If you are interested in a quick overview, you can jump to the next headline for a neat table.

SD is the abbreviation of “Standard Definition”. As the name already suggests, it was the standard quality of movies and other videos for a long time.

Compared to its successors, videos shot in SD appear in a far lower quality when watched on a big screen. When watching videos on a smaller screen (like a tablet or smartphone) the difference is not as striking. On a TV or bigger computer screen, however, an SD video appears in low quality.

HQ stands for “High Quality”. Contrary to the other qualities, when talking about a HQ movie, the screen resolution and thus the pixels per line do not play a role. High quality videos are defined by an increased bitrate which leads to an overall better quality of the pictures shown. This is, compared to SD. When comparing HQ videos to HD videos, the quality of HQ doesn’t quite hold up.

Thus, unofficially called HQ videos are rather a side note than a real measure for comparison in our case.

The most commonly known quality or screen resolution when talking about movies nowadays is HD. It stands for “High Definition” and the resolution of such videos is far better and higher than of SD videos. HD videos have a bigger file size when stored and require longer loading times when watching or streaming (e.g. on YouTube). Yet, they set out and succeeded over the SD format with most modern television and video playing devices being “HD-ready”, supporting movies filmed in HD.

The picture quality of HD is far more advanced compared to SD. Usually, all videos with more horizontal lines than SD can be considered HD. Yet, the typical resolutions are 720p and 1080p (also called “full HD”).

Last but certainly not least, lets have a look at 4K. 4K is the new kid in town and already one of the biggest players. Many filmmakers already shoot their movies in 4K for improved quality and thus more viewing pleasure. It’s already starting to be implemented in the manifacturing of newest television sets as well as some of them are already “4K-ready”. Still, 4K has not quite gained the popularity of the HD format just yet.

The 4K resolution is typically referred to as 2160p, however there are still two standards to distinguish from one another: DCI & UHD-1.